Introducing the Music of Ostad Elahi

The music of Ostad Elahi, a contemporary thinker, jurist, and master musician, is rooted in an ancient tradition that has been orally passed down from one generation to the next for centuries. Within this tradition, it is customary to recite sacred texts in the context of devotional gatherings. These recitations were generally accompanied by various instruments such as the tanbour, an ancient Kurdish lute; the ney, which resembles a reed flute; and the daf, a large frame-drum similar to the tambourine. Those who played the tanbour at these gatherings often did so at a rudimentary level, however, and solely as an accompaniment to their poetry.

One of the principal contributions of Ostad Elahi to the art of tanbour is that he transformed its simple and primitive repertoire into a highly sophisticated and intricate art form. Although Ostad Elahi’s music is grounded in an ancient tradition, his original compositions and numerous improvisations on the tanbour are unlike anything that had previously existed in terms of their depth, complexity, variety, color, timbre, and the range of emotions they invoke in the listener.

Elahi’s contributions to this art also include significant modifications to the instrument itself, adding a third string that created a whole new array of expressive color and sound. He further augmented this new capability with his art of ornamentation and unique playing style, which included using all five fingers of both hands. His musical techniques create several layers and levels of melodies and tempi, and constitute a carefully choreographed dance in themselves. Add to this the impact of his personality, his powerful presence, and his intentionality, and you create an experience that simultaneously engages all of the senses.

Since he considered music above all as a means of reflection and contemplation, Ostad Elahi never played in public, nor did he make any professional recordings of his music. He always said: “If played with a divine intention, music is the link that will connect us to the Source.” He thus played the tanbour only in small gatherings of family and close friends, where a mutual intentionality was inherent.

One of the unique characteristics of Elahi’s music is that it is a complete and self-contained entity, meaning that it does not require any external points of reference to listen to, enjoy, and benefit from. At the same time, while it is independent of any temporal or cultural restrictions, Ostad Elahi incorporates certain dissonances that serve as triggers to dislodge our senses from the habitual and to instead facilitate the opportunity for change.

As we become better active listeners, we will find that to fully benefit from Ostad Elahi’s music we must simply be willing to listen while setting aside our intellectual judgments and preconceived expectations. Once we align our intention with that of the musician, we will embark on a magical journey on the wings of the music itself. 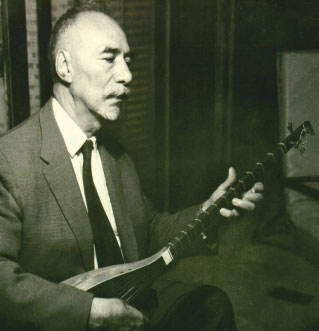